Madrid, 30th March 2022. After 24 hours piloting its racing molecule on the gold track, the IMDEA Nanociencia NANOHISPA team took first place in the international Nanocar Race II competition. The Nanocar Race is the smallest race in the world, covering the maximum possible distance that vehicles can travel, in a span of 24 hours. Vehicles are molecules conducted by the interaction with the tip of a scanning tunneling microscope (STM).

The NANOHISPA team managed to cleanly travel 678 nanometers and complete 54 slalom turns on the track. With this result, it has been the team that has managed to travel the most field, and the one that has made the most turns with the molecule, a remarkable fact given the complexity of handling such extremely small structures. The co-winning team NIMS-MANA (Japan) followed a different strategy that allowed them to travel more nanometers, but in a closed circuit that facilitated its trajectory. The ingenious molecular design of the group. Prof. Emilio M. Pérez, together with the skillful piloting of the group of Prof. David Écija made their SPARC nanocar go cross the gold circuit with an exquisite control, being the fastest in the world in this very special category. 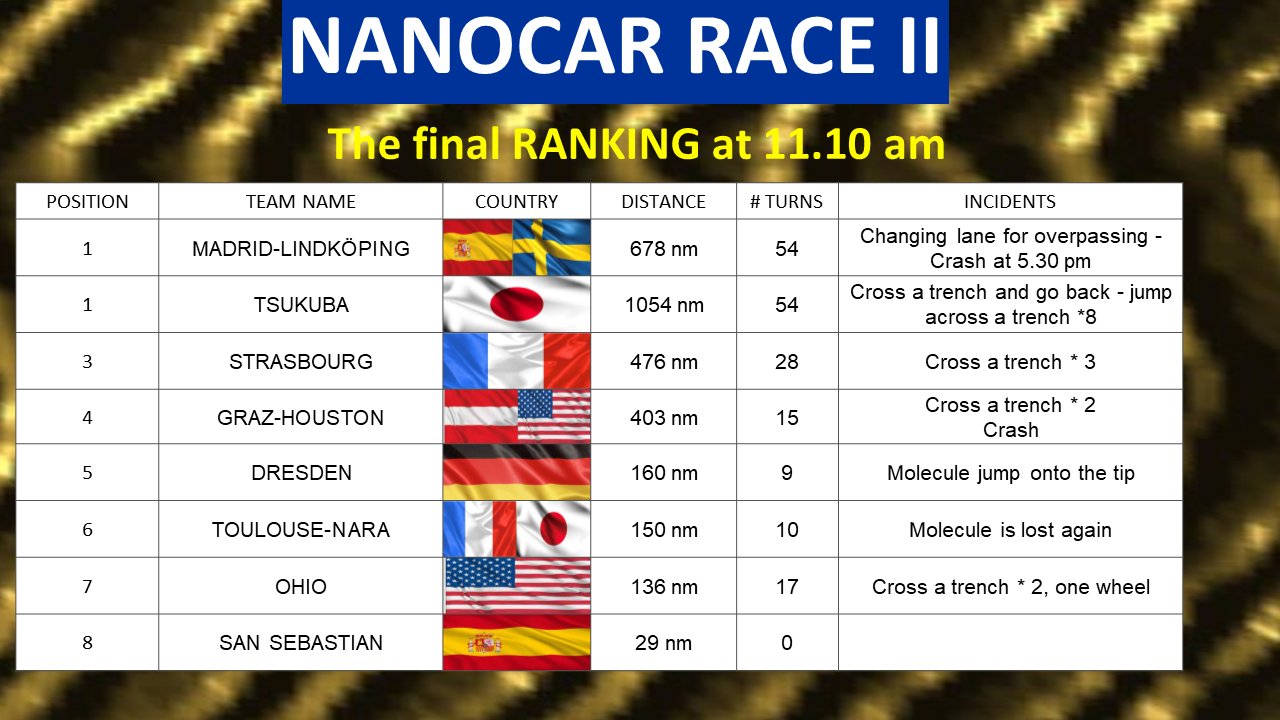 Prof. Emilio M. Pérez's group manufactured one of the most manageable and stable molecules of the nanorace, even though it was the smallest in the competition. The NANOHISPA team's racing molecule is composed of only 70 atoms, with toluene rear wheels and benzene front wheels anchored to the anthracene chassis. This minimalist hydrocarbon nanoarchitecture includes a "motor": a permanent dipole moment that makes the car susceptible to gradients of the electric field, and that can be used to propel and maneuver the nanoplaza. This chemical structure allowed the nanocar to move on the surface when approached by the tip of the STM microscope, interacting minimally with the substrate.

At the controls of the team of pilots was Prof. David Écija, ERC grantee (ELECNANO) and the researchers of his group Dr. Koen Lauwaet, Dr. Ana Sánchez-Grande, Dr. Ignacio Urgel and Dr. Ana Barragán, competing for 24 hours to inexorably advance their nanocar through the competition track. The circuit consisted of a structured gold surface with grooves through which the nanocars had to circulate, this being a remarkable task of handling molecules on the surface with high precision. From the first moments NANOHISPA was placed at the head of the ranking, being the first of the 8 competing teams from all over the world, both in distance, and in slalom turns on the track. Crossing the gold lanes penalized in time, and the NANOHISPA team did so only to overtake residual molecules located in the lane they were following, flaunting the extraordinary control and experience of the research group in molecular manipulation. 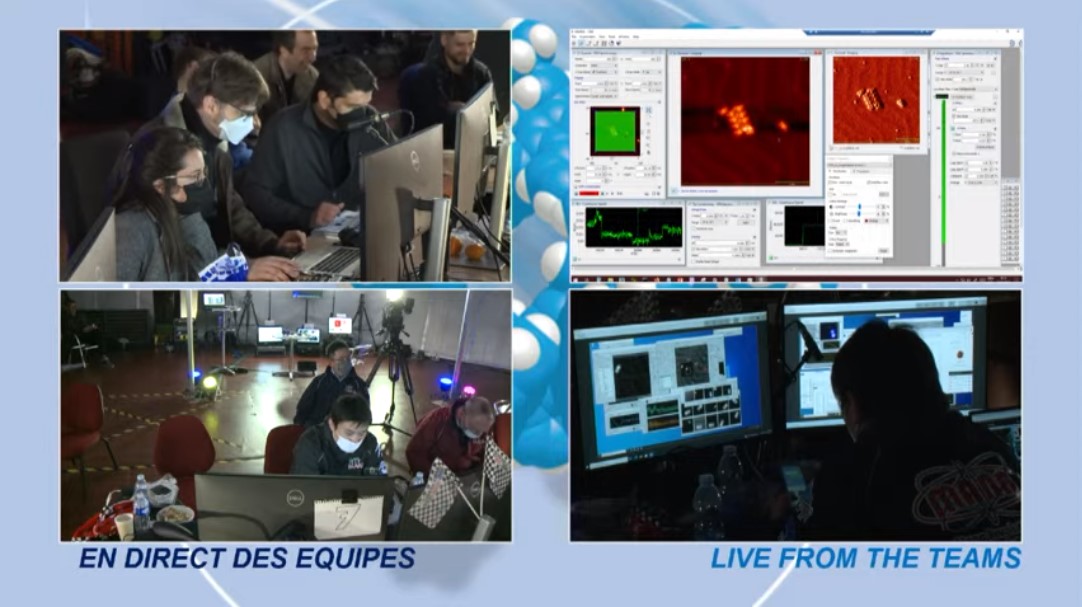 The group of Prof. David Écija was very aware of the nano-race, both in the control centre in Toulouse doing relays in the piloting, and in the IMDEA Nanociencia institute, controlling that the STM microscope that housed the nanocar had the optimal conditions to operate. After the more than 5.000 pulses of STM received by the racing molecule SPARC during its journey, the team forced a technical stop to relieve the damaged molecule. Other teams decided to continue with damaged nanocars. Such disparity in the interpretation of the rules did not prevent the Madrid team from being at the top of the final ranking.

The ultimate goal of this competition is to advance the development of nanomachines capable of performing real work, such as carrying molecular charge. The second international Nanocar Race was organized under the framework of the European project MEMO (MEchanics with MOlecules), and 8 teams from institutions around the world (United States, Germany, Austria, Japan and France) participated in it. The NANOHISPA team is officially sponsored by the Royal Societies of Physics and Chemistry (RSEQ, RSEF) through the Specialized Group on Nanoscience and Molecular Materials (GENAM), the company Scienta Omicron, and the ERC-Consolidator Grant ELECNANO.

The competition was broadcast live from the CEMES-CNRS campus in Toulouse. The race was watched in Japan alone by more than 38,000 people live on Youtube, waiting for global traffic from Youtube.

During the day of the nanorace, the IMDEA Nanociencia institute received 60 students from the Marqués de Santillana institute in Colmenar Viejo, accompanied by three teachers from the center. They were received by Prof. Rodolfo Miranda, director of IMDEA Nanociencia, with a talk on the history of the STM tunneling microscope (which can be seen on Youtube at this link). Afterwards, they were able to visit both the Low Dimensional Materials laboratory (Tomás Nicolás) and one of the 5 tunneling microscopes of the institute (Dr. Manuela Garnica, Dr. Fabián Calleja). For technical reasons, the microscope that housed the racing molecule could not be visited, to avoid disturbances that could alter the course of the race. Also, the students participated in a molecular modeling workshop (Alicia Naranjo, Marta González), and a workshop on the nanoscale (Projects Office).

After the workshops, a live connection was made with both, the pilot Prof. David Écija and the builder of the molecule Prof. Emilio Pérez, where the students took the opportunity to send them their doubts about manipulation and molecular design. To end the session, a contest was held with questions about what was learned and prizes were distributed to the three best participants.

The IMDEA Nanociencia family came together to support the team from a distance at an event where we connected again live with the Nanocar Race II control centre in Toulouse.

From IMDEA Nanociencia we congratulate the NANOHISPA team!