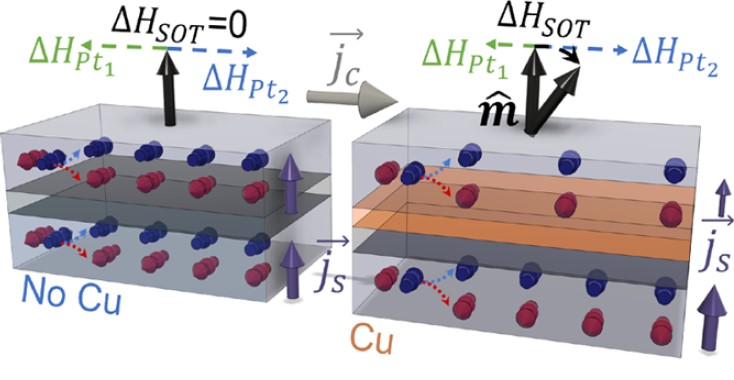 The latest advances in spintronics are based on nanometric thin film structures with perpendicular magnetic anisotropy in which the spin currents are used to produce changes in the magnetization of a magnetic layer. This effect is known as spin-orbit torque (SOT) and can be enhanced by suitably engineering multilayer stacks composed by alternated magnetic/non-magnetic metals. The typical structures employed to manipulate the magnetization via SOT are multilayers whose basic constituent is a ferromagnetic layer adjacent to heavy metal(s), which confer large spin-orbit coupling and promote the perpendicular magnetic anisotropy. These systems are the basic elements for spin-orbit torque magnetization switching, used in the next generation of magnetoresistive random access memory (MRAM) devices.

The SpinOrbitronics research team guided by Dr. Paolo Perna at IMDEA Nanociencia have observed the emergence of an interfacially enabled increase of the spin-orbit torque when an ultrathin Cu interlayer is inserted between Co and Pt in symmetric Pt/Co/Pt trilayer, in which the effective spin-orbit torque is expected to vanish. The enhancement of SOT is accompanied by a reduction of the spin-Hall magnetoresistance, indicating that the spin memory loss effect in the Co/Cu and Cu/Pt interfaces is responsible of both enhanced SOT and reduction in the spin-Hall magnetoresistance.

The observed enhancement of the spin-orbit torque provides new insight into the interfacial nature of spin currents that can lead to develop more efficient spintronic devices for MRAM spin-orbit torque memories and spin logic using cheap, easy to fabricate, and abundant materials like Cu.

This work has been partially funded by the FLAG-ERA grant SOgraphMEM funded by AEI Ref. PCI2019-111867-2, NANOMAGCOST-CM, FUN-SOC-RTI2018 and the Severo Ochoa Programme for Centres of Excellence in R&D awarded to IMDEA Nanociencia.

FLAG-ERA is an ERA-NET (European Research Area Network) initiative that aims to create synergies between new research projects and the Graphene Flagship and Human Brain Project. The goals and activities of FLAG-ERA are, in close connection with the Flagships, to set up mechanisms to facilitate and encourage integration of nationally/regionally funded research into the Flagship work plans. The project SOgraphMEM, funded by AEI  Ref. PCI2019-111867-2 through the FLAG-ERA Joint Translational Call (JTC) 2019. SOgraphMEM is coordinated by Dr. Perna and will investigate the promising of graphene in spintronics, particularly it will test specific materials for a novel branch of spintronics called spin-orbitronics exploiting electron spin and momentum.