The ITN ESTABLIS will train a team of 11 PhD Fellows and 4 Postdoctoral Fellows Establis in the development of materials and techniques for cheap, flexible and stable organic solar cells (OSCs). The task of IMDEA within the EU network ESTABLIS is to understand how degradation in organic solar cells influences the photovoltaic event chain, that occurs on time scales from 100 fs (charge transfer) up to microseconds (charge extraction).

Consequently, the first step was to build up and optimize our main research tools: microsecond pump-probe spectroscopy, photo-induced absorption spectroscopy and femtosecond spectroscopy. The set-up for microsecond pump-probe spectroscopy has now a noise level in the 10^-7 region, and is thus internationally competitive. Moreover, a set up for time resolved photovoltage has been built up, in order to benchmark electrical and optical information from the solar cells under study. One of our aims is to understand why oxygen reduces OSC’s efficiency. Fig. 1 shows how the presence of oxygen reduces the extraction of charge carriers in OSCs. 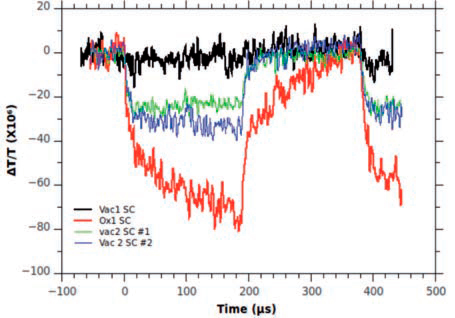 Fig.1. Optical detection of charge carriers in an organic solar cell under short circuit (SC) conditions via their induced absorption (negative differential transmission, ΔT/T, at 980nm. A highly efficient pristine solar cell (black curve) does not accumulate charges at all, because of efficient extraction. After oxygen sorption (red curve), a strong charge accumulation is found after light on at 0 μs, clearly showing that extraction is no longer complete. The process is partially reversible after annealing in vacuum (Vac2) (green and blue curves). Karuthedath, et al., to be published.