Emilio M. Pérez obtained his BSc (2000) and MSc (2001) in Chemistry from the Universidad de Salamanca. He then joined the group of Prof. David A. Leigh at the University of Edinburgh (UK) where he obtained his PhD in 2005. He joined the group of Prof. Nazario Martín at the Universidad Complutense de Madrid as a Juan de la Cierva postdoctoral fellow in 2005. In December 2008 he joined IMDEA Nanociencia as a Ramón y Cajal researcher. In 2013 he was promoted to Senior Researcher, and since December 2015 he is also Executive Director for Scientific Outreach.

Dr. Pérez has received several awards, including the 2006 IUPAC Prize for Young Chemists, the 2009 RSEQ-Sigma-Aldrich Award for Novel Researchers, and the 2013 Miguel Catalán Award for Scientists <40 yeras old.

Dr. Emilio M. Pérez was awarded the prestigious ERC Starting Grant support for research with the project "MINT" (Mechanically Interlocked Carbon Nanotubes) and in 2018 he has been awarded a ‘Proof of Concept’ grant for his project entitled "PINT" (Ultrastrong Composites through Polymers Interlocked with carbon NanoTubes).

The group has varied interests in the chemistry of low dimensional materials. In particular we are active in: 1) Novel methods for the chemical modification of carbon nanotubes: We have developed methods for the synthesis of rotaxane-type derivatives of SWNTs, the first example of mechanically interlocked derivatives of SWNTs (MINTs, see Chem. Eur. J. 2017, 23, 12681 for a review). MINTs show fundamentally different properties from other types of SWNT derivatives, which might have implications in the reinforcement of polymers (ACS Nano 2016, 10, 8012), catalysis (Nat. Commun. 2018, 9, 2671), and sensing. 2) Chemistry of 2D materials: We are developing improved methods for production of ultrathin 2D materials and van der Waals heterostructures through liquid phase exfoliation from their bulk sources (Nat. Commun. 2017, 8, 14409). From these suspensions, we build functioning (opto)electronic devices using dielecrophoresis (Nanoscale 2018, 10, 7966). Finally, we are interested in fundamental problems in the chemistry of 2D materials, such as chemoselectivity (Nano Lett. 2016, 16, 355). 3) Fundamental principles of supramolecular chemistry: Lastly, we are very interested in measuring and understanding noncovalent forces, which underlie all the results of the previous two lines. For example, we have developed a method for the determination of association constants of small molecules towards SWNTs and unveiled the different contributions to the stability of the complexes (Chem. Sci., 2015, 6, 7008-7014 and  Chem. Eur. J. 2017, 23, 12909-12916). Optical tweezers (OT) are one of the most successful single-molecule force spectroscopy techniques, to the point of Arthur Ashkin being awarded with the Nobel Prize for Physics 2018, for their use to study biophyisics. In these two papers, we use OT to study synthetic supramolecular systems for the first time (Chem. Sci. 2017, 8, 6037-6041 and Nat. Commun. 2018, 9, 4512). 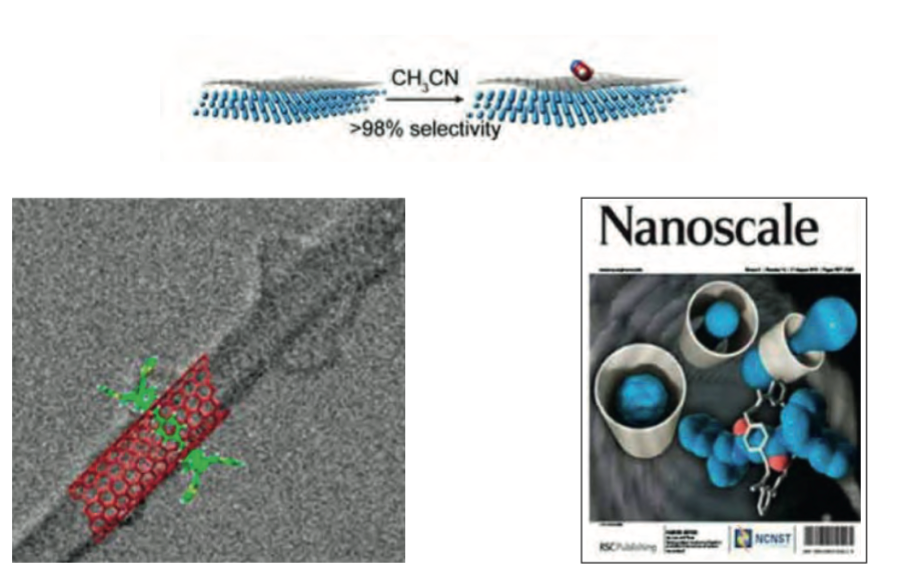